A Speech by Chief Seattle (Skokomish) in 1854

The Great Chief in Washington sends word that he wishes to buy our land.

The Great Chief also sends us words of friendship and good will. This is kind of him, since we know he has little need of our friendship in return. But we will consider your offer. For we know that if we do not sell, the white man may come with guns and take the land.

How can you buy or sell the sky, the warmth of the land? The idea is strange to us. If we do not own the freshness of the air and the sparkle of the water, how can you buy them?

Every part of this earth is sacred to my people. Every shining pine needle, every sandy shore, every mist in the dark woods, every clearing and humming insect is holy in the memory and experience of my people. The sap which courses through the trees carries the memories of the red man.

The white man’s dead forget the country of their birth when they go to walk among the stars. Our dead never forget this beautiful earth, for it is the mother of the red man. We are part of the earth and it is part of us. The perfumed flowers are our sisters; the deer, the horse and the great eagle are our brothers. The rocky crests, the juices in the meadows, the body heat of the pony, and man- all belong to the same family.

So when the Great Chief in Washington sends word that he wishes to buy the land, he asks much of us.

The red man has always retreated before the advancing white man, as the mist of the mountain runs before the morning sun. We know that the white man does not understand our ways. One portion of land is the same to him as the next… the earth is not his brother, but his enemy, and when he has conquered it, he moves on. He leaves his father’s graves behind, and he does not care. He kidnaps the earth from his children…His appetite will devour the earth and leave behind only a desert.

The air is precious to the red man, for all things share the same breath- the beast, the tree, the man, they all share the same breath. The white man does not seem to notice the air he breathes. Like a man dying for many days, he is numb to the stench…The air is precious to us, the air shares its spirit with the life it supports. The wind that gave our grandfather his first breath also receives his last sigh.

This we know: The earth does not belong to man; man belongs to the earth. This we know.

Whatever befalls the earth befalls the sons of the earth. Man did not weave the web of life; he is merely a strand in it. Whatever he does to the web he does to himself.

Even the white man cannot be exempt from the common destiny. One thing we know, which the white man may one day discover- our god is the same god. You may think that you own him as you wish to own the land but you cannot. This earth is precious to the great spirit, and to harm the earth is to heap contempt on its creator. The whites too shall pass; perhaps sooner than all other tribes. Continue to contaminate your bed, and one night you will suffocate in your own waste.

Your destiny is a mystery to us, for we do not understand when the buffalo are all slaughtered, the wild horses tamed, the secret corners of the forest heavy with the scent of many men, and the view of the ripe hills blotted by talking wires. The end of living and the beginning of survival.

When the last red man is vanished from th is earth, and his memory is only the shadow of a cloud moving across the prairie, the shores and forests will still hold the spirits of my people. For they love this earth as the newborn loves its mother’s heartbeat. So if we sell you our land, love it as we’ve loved it. Care for it as we’ve cared for it. Hold in your mind the memory of the land as it is when you take it. And with all your strength, with all your mind, with all your heart, preserve it for your children, and love it… as the Great Spirit loves us all.”

as presented by William Arrow Smith in the High Country News

It is estimated that in 1860 there were between 30 and 90 Million buffalo on the plains. Their stampedes could be heard for hundreds of miles – called by the natives “Rolling Thunder.” These animals had thrived here for thousands of years, and the people that lived here lived in turn off the buffalo with great economy – taking only sick, old, or weak animals, and using every part with little waste. When the railroad began to cross the plains, in the mid 1860’s, there was a massive influx of whites. Killing buffalo became an industry ($1.00 per hide), and the railroad made it easy to send the hides back east to be made into car tops, suitcases, and industrial drive belts. The government funded parts of the killing spree, knowing the devastating effect on Native morale and survival.

By 1870, the rolling thunder was silent. Millions of buffalo had been killed, skinned, and left to rot. The herds had dwindled to a few thousand, when the killing finally eased off, partly because of the outcry from a few whites with a conscience.

How would white America react now if some alien came and destroyed all of our cattle, sheep, chickens, and swine? With wails of torment, and a sense of being deeply wronged, and a convienient forgetting of our own atrocities, committed so recently.

Bison bones were used in refining sugar, and in making fertilizer.
The federal government promoted bison hunting for various reasons, to allow ranchers to range their cattle without competition from other bovines, and to weaken the North American Indian population. The US government even paid a bounty for each bison skull recovered. Military commanders were ordering their troops to kill bison — not for food, but to deny Native Americans their own source of food.
Famous quote J. West Phippen, “Kill Every Buffalo You Can! Every Buffalo Dead Is an Indian Gone,”
As a description from Harper’s Weekly noted: “The train is ‘slowed’ to a rate of speed about equal to that of the herd; the passengers get out fire-arms which are provided for the defense of the train against the Indians, and open from the windows and platforms of the cars a fire that resembles a brisk skirmish and massacred all the bison they can find.” 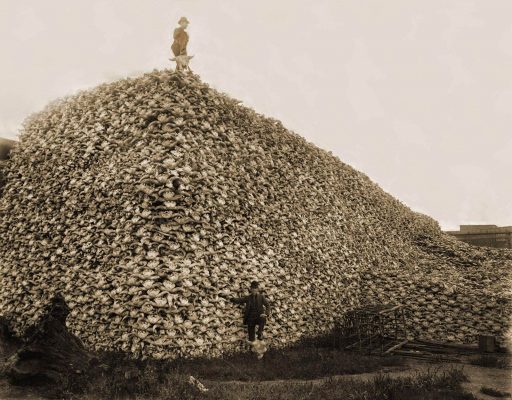 Interesting facts:
• In 1884 there was around 325 wild bison left in the United States – including 25 in Yellowstone. Before the Europeans arrived in the New World, there was more than 50 million bison in North America.
• How many bison skulls might be in the photo? Some rough calculations based on skulls volume and the dimensions of the pile calculate 180,000 skulls on that pile.

We’ve been personalizing wire name jewelry for over 30 years. We love it and so does our customers, over 36,000 of them. We love to give back to the personalized name jewelry community by sharing some of our techniques and tips in this blog.